In the aftermath of Hurricane Harvey’s 1000 year flood in Houston and the surrounding area, the media have lost sight of the other climate disasters happening in both the US and around the world.

As happened with rural areas in East TX and Western LA after Hurricane Rita, the focus on major cities leaves those in less populous areas without a voice.  Harvey was a Category 4 hurricane when it hit Southwest Texas just northeast of Corpus Christi.  Smaller coastal towns were devastated.  Their small piles of rubble are not as photogenic as Houston freeways under 25’ of water and brigades of citizens in bass boats and canoes cruising flooded streets rescuing people and pets.
Along the devastated coast, “owners say the storm’s massive power caught them by surprise.”  The mayors of Houston and Beaumont say the same.  We’re in the realm of willful ignorance here.  The projections were amazingly accurate.  So what about 130 mph winds, massive storm surge and 40+ inches of rain didn’t they hear?  In defense of the coastal residents, early predictions were for only a Cat 3, and many expected a slightly less powerful event.  Not so for the mayors.  Yes, the excuse that a massive evacuation would have been a disaster also is almost correct.  There is a reasonable option, as with Ike: coastal surge areas mandatory and first, then recommended evacuations from all flood-prone low lying areas.  Yes, this would have moved people out of only about half the flooded homes (some were outside the 500 year flood plain).  AND cutting the number of rescues in half would have been a big win.

Monsoon floods: 1200 dead, 41 million affected in India, Bangladesh and Nepal.  “While South Asia frequently suffers flooding during the monsoon season, between the months of June and September, aid agencies have deemed these particular floods “catastrophic”. Wide-scale flooding stretching across the Himalayan foothills has caused landslides and washed away tens of thousands of homes and vast swathes of farmland.”  Is this lack of coverage because the West is more interested in people like us or is it because this disaster was so slow in developing?  Like Texas, flooded Asia still has a few weeks to go before the waters begin to subside.

From Los Angeles to Montana to Western Canada, after a summer of drought, massive fires burn out of control.  Record heat throughout western US and Canada increases risk. 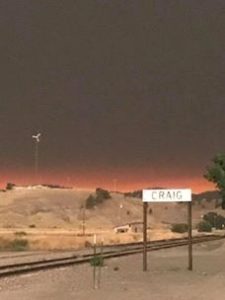 Thanks to Mark Juedman, Transition USA for the photo.

A Montana afternoon turns surreal as smoke blocks the sun.  Air quality alerts have reached East into WI and IL.

Commentators worry about oil prices as Texas refineries are still closed.  Meanwhile, only farmers are asking what happens to food prices when the northern plains turn into a fire-ravaged dust-belt?  Midwestern farmers have been shipping fodder and grain west in an attempt to help ranchers save cattle, but as the dry weather extends into IA and IL, yields may drop there.

This is not simply a North American problem.  South Africa and Australia also suffered devastating fires after a dry winter.  Southern Europe has not escaped.

It’s easy to cry “global warming” as temperatures soar over 100 and no moisture is in sight.  Warmer waters in the Gulf (probably the new norm) are blamed for the amount of moisture available within Harvey.  But it’s NOT that simple. This is a complex system.  Some of the NOAA models and historical reconstructions show temperature spikes as precursors to an ice age.  This appears to be caused by cold meltwater on top of the normally warm north Atlantic currents.  In a complex process, winter snow levels increase and cooling begins.

The jet stream over the US and Canada has changed configuration slightly, pushing moisture east.  This change also seems to be responsible for stalling Harvey over Texas.  Research continues on the impact of such changes over the last 20 years.

Climate change doesn’t cause Hurricanes.  Warming Gulf waters, however, are responsible for the magnitude of the event.  Subsidence from pumping groundwater and oil also increased the flooding in Houston.  In addition, predatory development which both puts homes in flood-risk areas and also ignores down-stream risk of poor water control.  Houston homes which are not in the flood plain have been inundated by controlled releases from inadequately designed retention areas.